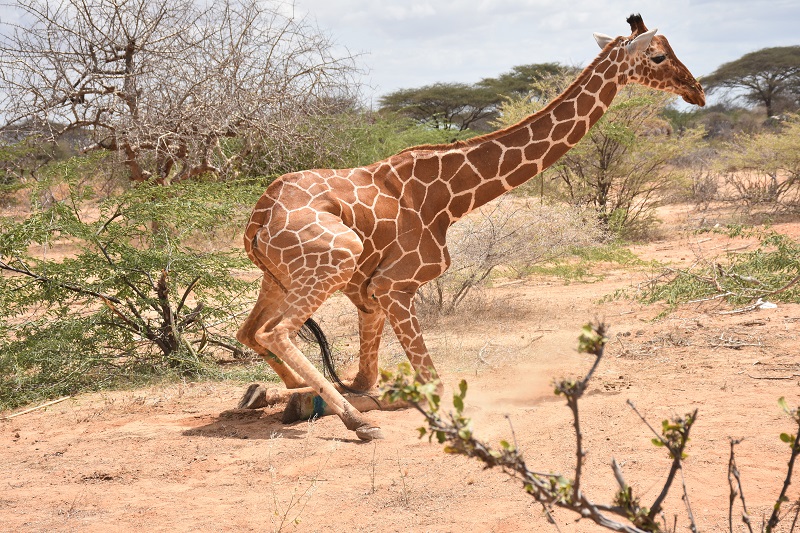 No Comments on Giraffes and humans battle for the Tana river.Posted in Giraffe Tales By stewahtPosted on 12 August 202012 August 2020Tagged Conflict, Giraffe, Humans, Tana River

Conflicts exists between human and wildlife whom with contrasting interests have little or no tolerance to each other. In Kenya human wildlife conflicts are on the rise. Wildlife such as baboons, elephants, lions and cheetahs invade community areas surrounding protected areas and conservancies destroying crops and killing livestock have been reported.

In Garissa, wildlife including giraffe, baboons and hippos occupy community lands and co-exist with humans. They interact and compete with human for the limited available natural resources. Conflicts result as the community around practice both agriculture and pastoralism. Historical woodlands that supported giraffes have been converted to agricultural plantations, further, increased livestock and human populations have as well resulted to easy contact with wildlife.

River Tana, the longest in Kenya and main source of water in Garissa, is the major cause of conflict between giraffes and community. Despite the presence of dangerous wildlife in the river such as crocodiles and hippopotamus, the community around have converted the its bank into farm land growing different types of crops. The availability of water for irrigation make the practice easy. Giraffe in Bour Algy, Gumarey and Jarirrot areas find it hard to access the precious cool water and have to go through farm lands encountering food crops in the process, eating mangoes and guavas and eliciting tension and retaliations from farmers. This is despite few giraffe water troughs that are strategically located outside the farms.

With presence of human during the day, tilling and cultivating their land, giraffe avoid getting close to the farm. They wait till night when they can access water at ease, getting into the farms with plenty of mangoes and guavas as they head to quench their thirst. Mangoes and guavas are eaten when ripe, which is why the conflict is high when the crops mature. Due to the huge losses incurred, the farmers in their retaliatory attacks mostly use snares to trap giraffes along their paths and in the farms. Trapped giraffes are killed and eaten as meat. Other giraffes escape with the snares where they will severely be wounded to the point that they are no longer able to feed due to pain.

Giraffe population country wide has declined and those in Garissa are also facing multiple threats including poaching and habitat loss. HCP in partnership with Kenya Wildlife Service, Garissa County Government and other stakeholders have recently been spearheading giraffe conservation focusing on desnaring, veterinary care, capacity building and education and awareness.

Giraffes and humans battle for the Tana river.