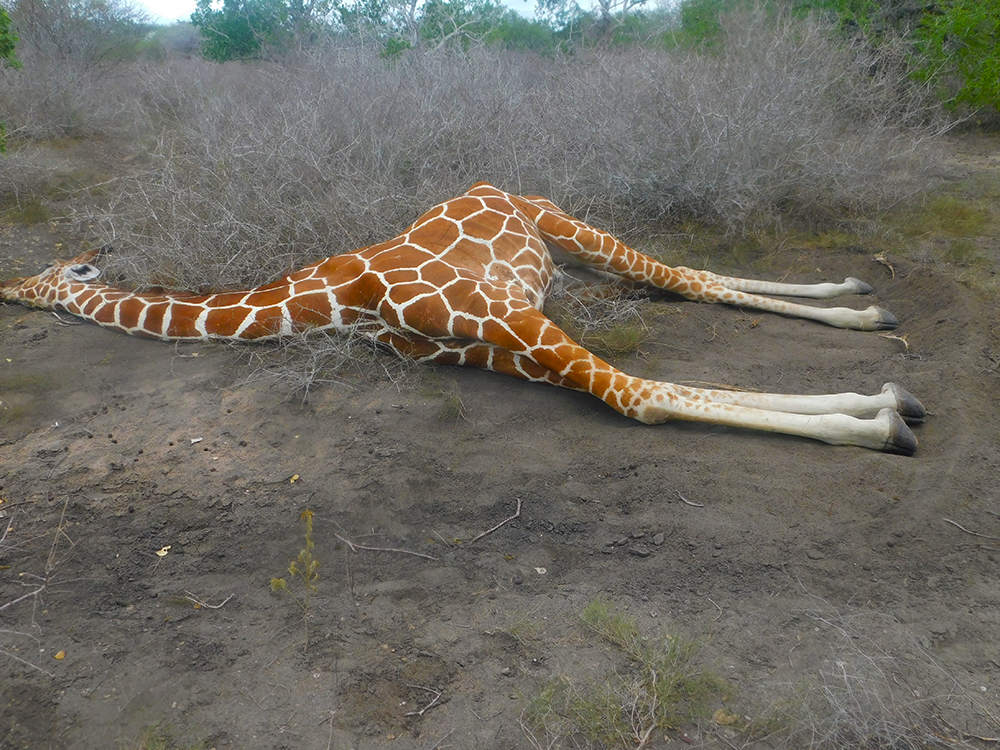 We arrived in Dertu town at one of the completely dried water holes to find multiple carcasses of giraffes. Their skin scorched and appeared grey, lips cracked and body covered with skin liaisons. Dr. Ali and a team of scientists assess the carcasses and their initial diagnosis suggests Sarcoptes scabiei infestation which is an opportunistic parasite in undernourished giraffes. This parasite has previously been described as an emerging and re-emerging threat to the survival of giraffes in northern Kenya. Quickly the team initiated an epidemiology response to investigate the cause of the mortalities.

During the field survey, we darted four female giraffes with poor body conditions where we collected skin scrapings, ticks, and blood samples. Through this, the team was able to identify over 25 cases of sick Giraffes and 42 wildlife mortalities. The worst being mass mortalities of giraffes at Dertu area where a total of 21 Somali giraffes succumbed. Others included 15 kudus and 6 gerenuks.

The skin scrapings were taken to a laboratory where they tested negative for suspected mites and a complete cell count from the four giraffes blood samples indicated normal limits. However, protozoa piroplasm was observed on the four blood smears. While we require more samples to make conclusive inferences and potentially disentangle the possible relations between this outbreak and species age classes, sex and spatial distribution of this parasite, we also considered poor nutrition as a result of a prolonged drought that limits resources and increases browsing pressure on few forages left.

It has been suggested that plants respond to browsing by producing tannin that limits over browsing. Tannin is toxic and under normal circumstances, animals would avoid ingestion of high toxins by not browsing on such plants until the tannin levels return to normal. Unfortunately, limited forage results in re-browsing and ingestion of high toxins, that could result in the mortality of individuals with weak physiological tolerance. This case has been observed in South Africa where the deaths of Kudu were linked to the increasing tannin content of their browse.

The somber tale of the fallen giants